What IS My Home Worth These Days? Click here to find out.

Metro Phoenix home sales fell in June. Prices for houses put on the market climbed. And the time it took for houses to sell shortened.

That data is all from the latest Arizona Regional Multiple Listing Service Stat Report. It’s the first issue of the report researched by housing analyst Tom Ruff of the Information Market.

“During the last five years, our housing market has been in one painful transition: not unlike the party boy who was dancing on the table with a lampshade on his head all night, having to put on his game face for a 7 a.m. sales meeting the next day,” writes Ruff in his inaugural report. “The ramifications of these actions have been both brutal and subtle, and the market corrections have been obvious.”

The Information Market was purchased by ARMLS last year.

"some markets in Arizona, Florida, and Nevada are saturated with rentals."

To Get a Free Home Valuation
Please click on the link below:
MyTrueHomeValue.com

The renting revolution: As home prices rise, the nation continues to add renters in lieu of home owners. Is this a temporary shift or something more permanent?

Renting is in vogue.  Regardless of the rhetoric, we have added over 1 million renting households since the housing bubble burst in epic fashion while losing home owners.  What is interesting in spite of the rapid rise in home values is that many more households are becoming renters.  Part of this dynamic is occurring because of a dramatic amount of purchases going to investors seeking to become landlords but also, we have 5 million people that have lost their homes to foreclosure and may now opt to go the renting way.  The nation is becoming much more comfortable with renting a variety of items including cars (ZipCar), locations for brief trips (AirBnB), and of course housing.  It is also the case that a large part of our nation is having a tough time financially and job security is definitely not what it used to be so people are opting for more mobility.  It is a fascinating reversal that reflects a change in economics and also a drive by investors leveraging low rates to chase yields in unlikely markets.  Is this a temporary trend of something more permanent?

The peak was reached in 2004 and has now reliably fallen to levels last seen in 1995.  Interestingly enough, household incomes adjusting for inflation are also back to levels last seen in 1995.  As we mentioned in a previous article, if we include all additional households in negative equity positions the homeownership rate is likely closer to 62 percent pushing the chart to multi-decade lows.  It is clear that once the bubble burst in 2007 that the quick reversal was because of people losing their leveraged properties.  But the housing market is on a rapid ascent up at least with prices and in some markets with mania like actions taking place.  So why is this happening? 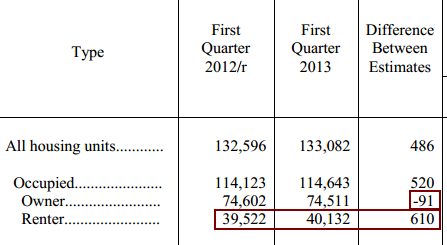 We’ve added over 1 million renting households since the bubble popped.  In the last year alone, we’ve lost on a net basis 91,000 owner occupied households and added 610,000 renters.  In this period, we’ve also added 486,000 additional housing units.  Doing the math and given the investor demand, the additional housing units are very likely in favor of rental supply (multi-unit housing permits are also on the rise).
The push towards renting
The good news is the rental vacancy rate continues to decline:

At least from a renting perspective, this is a positive trend for those owning rental properties.  Obviously Wall Street spotted this trend since the bubble burst and has been diving in hand over fist into the housing market pool, initially empty but knowing the Fed would be the source of the water.  Yet some markets in Arizona, Florida, and Nevada are saturated with rentals.  There is now a likely tipping point in terms of large money investors putting in large sums of money for very weak yields.  After all, with rates zooming up and the stock market on a roll there are other sectors to chase for money.
Expensive state nearly 50/50 when it comes to renters and home owners
California’s homeownership rate is inching closer to where it was in the 1980s in spite of home prices going bonkers in the last year or so: 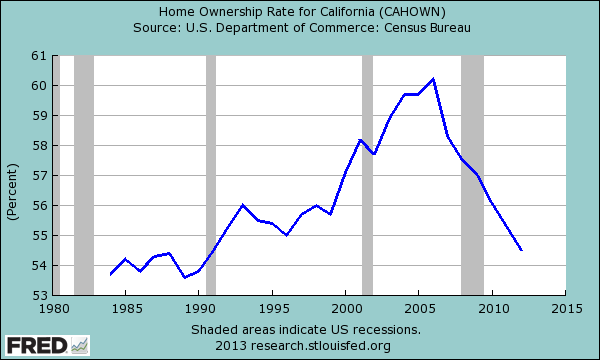 California has a homeownership rate of 54 percent and with negative equity owners thrown in we are closer to 50 percent meaning half the state is renting.  And make no mistake, those that are underwater are basically in a renting position or worse.  They cannot move without selling their home for a loss.  At least with a rental, you give a 30 day notice and you can move as you see fit.  Some that bought at the peak, even with the wild appreciation in some areas, are still down $100,000 or $200,000.  To leave, they would have to pay to sell.
There is this pervasive logic that somehow, some people missed another opportunity.  These people claim that they want to buy to stay put so what does it matter that the mania pushed prices up again?  You don’t unlock any equity until you sell!  So in other words, they are speculating since they say “I missed out on a $100,000 gain” but this flies in the face of staying put and setting roots with your family.  If a simple one year move is enough to price these people out they are not in a financial position to buy anyway.  Yet some will never feel satisfied until they own a home like they lost their trusted childhood security blanket.  Given the above data, this seems to be more of a minority in probably high cost areas because in most of the country you can buy a modest home with the absurdly low interest rates and likely be at rental parity.  In very prime California markets, that is unlikely unless you come in with large down payments (i.e., $200,000+) and are ready to contend with the hoards of people stampeding into weekend open houses.
Looking at the data, the trend is very clear.  As we have chronicled for a couple of years now the investor demand is unprecedented and many are left diving in to fight for the limited supply or rent.  Because of the sour taste of the bursting housing bubble and emerging trends regarding home buying behavior, renting has been on a solid trend going back to 2007.  Even with the recent gains in the market renting is powering forward over buying.  People adapt.  Many people are finding alternatives and are finding it more beneficial to live where they choose based on their career and lifestyle mobility versus “drive until you qualify” which is a very typical mindset in California.  You also have to wonder what impact this will have where in states like California, half rent (think of raising taxes or other challenges that may arise in the future when they go to vote).
I’m curious to hear in the comments about those that have decided to rent versus buy in the current market even though they are financially in a position to buy.

To Get a Free Home Valuation
Please click on the link below:
MyTrueHomeValue.com
at July 16, 2013 No comments: