The housing market without a doubt is slowing down and it should be clear that the “hot” summer selling season is simply not going to materialize. Even in house horny Southern California, sales are down 12 percent year-over-year and the median price actually fell in July from June. Typically, the sunny California sun fries the portion of the brain looking at math during the summer but something else is going on. People also conveniently forget that 7,000,000 foreclosures have occurred since the housing bust hit with 1,000,000 happening here in the “never a bad time to buy” California market. We recently discussed the incredibly hot rental market in the state. It seems that rents are having a good run over the last year as more Americans welcome their new feudal landlords from Wall Street. In fact, we now have the highest percentage of households renting in 20 years. If we look at the data, what we find is that housing is simply consuming a larger portion of income for households. It is amazing how many people in California have absolutely no comprehensive plan for retirement. They are willing to leverage every penny into housing but ignore other important areas like building a balanced portfolio. Taco Tuesday baby boomers sit in million dollar crap shacks welcoming their student debt laden children back home while they feast on Purina Dog Chow. It is pretty clear what is going on right now: more of your income is being consumed by housing.

The conveyor belt to rental nation is moving efficiently
One of the points made during the early days of the first housing bubble was that the Bureau of Labor and Statistics did a poor job measuring housing inflation. The CPI uses the owners’ equivalent of rent (OER) as a substitute to actual housing payments or underlying home value (i.e., PITI). This does an okay job in stable housing markets but fails in meth addicted housing cycles like the one we now live in. The OER assumes you will rent your house out which of course, is not the case unless you are Wall Street. Many of the $700,000 crap shacks in SoCal would rent from $2,500 to $3,000 and probably went up about 5 percent over the last year. Yet some of these homes went up in price by 20 to 30 percent. If your goal is to measure price increases, shouldn’t you actually measure the price of the actual thing versus some derivative of it?

Since this is the measurement tool, you can see the big divergence in prices and rents here: 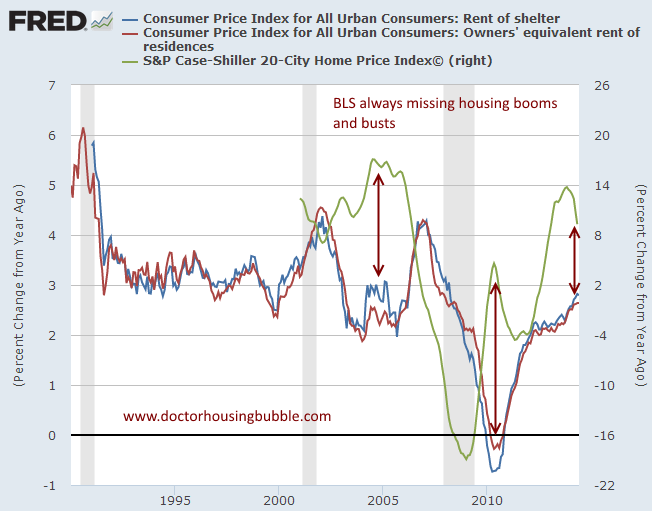 The CPI once again has missed the housing jump of 2013. For example, in 2005 when the Case Shiller was showing 16 percent annual price increases, the CPI was showing rents and the OER going up by 2.5 to 3 percent. Seems like a big difference but of course, this gives the Fed more fodder to say inflation is muted even though housing is the biggest line item for most American families.
You’ll notice that the Case Shiller Index which is one of our better gauges of price went up nationwide by 14 percent last year. The CPI went up by 2.6 percent for the OER. Big difference.

So how are people paying for all of this? Well people are simply paying more of their income to rent: 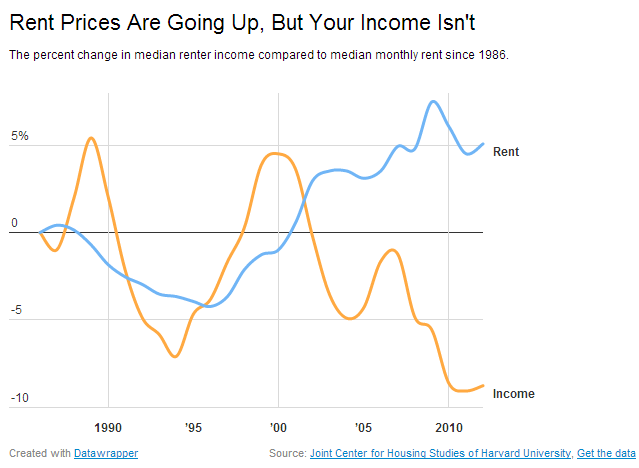 Source:  Mother Jones
With rents, you have to pay with actual household income. This is why in California, you have 2.3 million adults living at home because they simply cannot afford a rental. Pent up demand? I doubt it. This is why sales are dropping and prices have gone stagnant. It isn’t for want of buying. No. In fact people are lusting for housing just like they were in 2005. If given the chance, people would “ice challenge” their way into a ludicrous mortgage with the aspiration of property laddering their way up into the feudal class. You might be a renting pleb today, but tomorrow you will be the next oligarch of housing. By the way, cash sales hit a four year low in SoCal since investors either want massive annual gains or good cap rates.

We now find that since the recession ended a massive number of households are paying more than 50 percent of their income in rent: 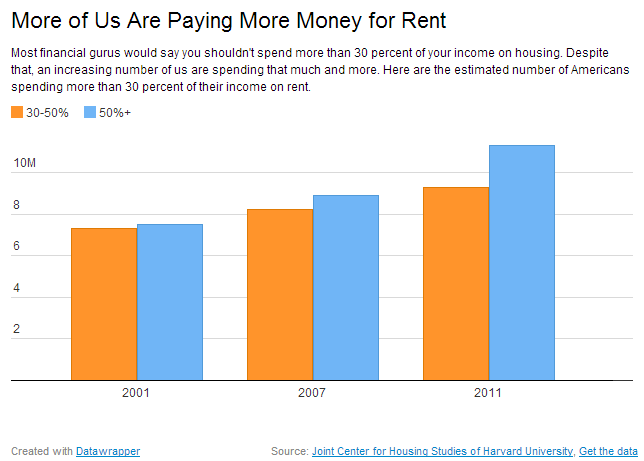 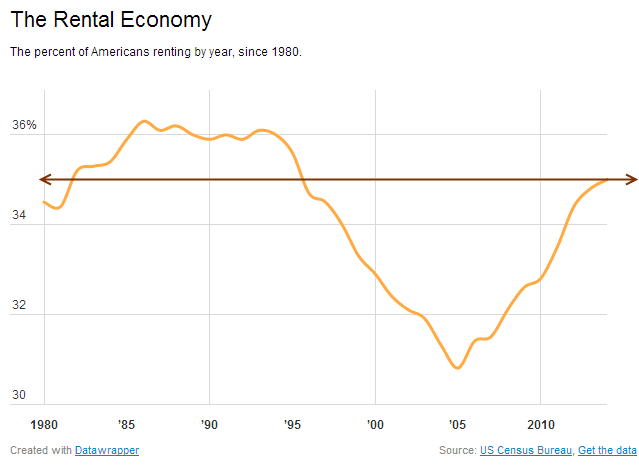 Going back to the point of balancing out your plans for retirement, so many people assume their residence is somehow going to throw off income for them in old age. Many baby boomers are seeing this is not the case. You have taxes, insurance, maintenance, and other costs that actually suck money out of your income even when the principal and interest are taken care of. The funny thing about this is the big push for Prop 13 highlighted this at the core. That grandma that was being “kicked out” on the street because of higher taxes was an example of someone without a balanced portfolio. She had burned her mortgage but like death, taxes will never go away. Current baby boomers drinking Martinis in their hardwood floor and gold plated sarcophagus in SoCal many times are scraping by even though they have solid equity in their home. I love seeing a home in this category being put to market because you can see how outdated the place has become. Living in million dollar homes yet unable to make a few modifications.

Also, I tend to believe the renter numbers are understated. How many “kids” living at home are even paying rents to their parents? All we know is that 2.3 million adults in California live with their parents. This is one state of many. So for older folks, what will their income stream be in retirement? Social Security? Stocks? The figures don’t look good here. In many cases you have people with one or two years of living expenses and all of their net worth tied up in their home that will cost money to maintain. Now you can see why Prop 13 struck a chord back in the 1970s showing that history repeats and people in California have been lusting for homes for many decades, a tradition of sorts. Reverse mortgages are an option but your kids might hate you for it. Screw them right? They can pile into a rental and play furniture Tetris of getting in four people into a 2 bedroom 1,000 square foot place in any hipster area of Los Angeles.

It should be clear that what is simply happening is more disposable income is being taken into housing either by rents or mortgage payments. In California, close to half the state rents (and a growing number are living at home – rent or no rent). In L.A. County, the majority rent. Keep in mind all of this is happening as the stock market caps a near 200 percent run from 2009 and housing is coming off a banner 2013 year. Yet for Americans households, income growth is not keeping up. A big deal for the growing number of renters. For now, get used to the trend of feudal landlords.