Forecast Says U.S. Home Prices Are Overvalued, Will Peak In 2016 The U.S. home price rebound has nearly run its course, and Americans should prepare for several years of home prices that don’t increase much, if they rise at all, according to a report published by bond strategists at Bank of America Merrill Lynch.

Most economists expect home prices to rise around 5% this year, before rising at around 3% over the next few years. Home price increases in recent years have been driven primarily by supply shortages, and some economists have said that prices could continue to outpace income or rent growth if more homes aren’t made available for sale.

To be sure, U.S. home prices have been especially difficult to predict in recent years. Many analysts prematurely called a bottom in 2008 or 2009, and others called for continued declines in 2012, after prices had started rising.

Analysts Chris Flanagan and Gregory Fitter concede that their view is “well out of consensus.” They say that U.S. home prices, after being undervalued relative to household incomes by around 6% at the end of 2011, have now rebounded to levels that are 9.7% overvalued. Their model uses the S&P/Case-Shiller home-price index. 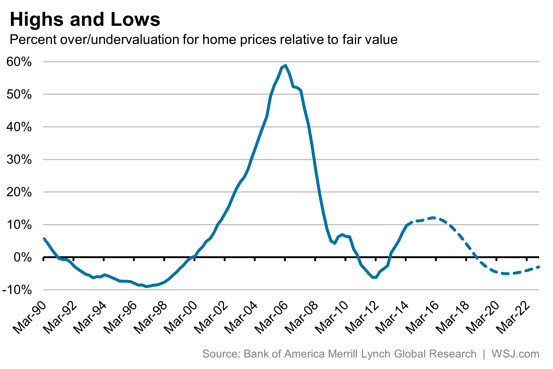 They estimate that home prices will rise another 3% annually in each of the next two years, well below the 9.5% annualized growth rate since the end of 2011, when the market hit bottom. That would leave prices around 12% above the “fair value” level implied by household incomes. The model then forecasts modest declines in the following years, resulting in net annualized home-price gains that are flat through the middle of 2022.

So does this mean U.S. housing markets are in another bubble? If it is, it’s much less pronounced than in 2006, when home prices peaked at levels that were overvalued by nearly 59%, resulting in price declines of nearly 35% over six years.

Messrs. Flanagan and Fitter say that the regulatory framework enacted since the financial crisis in 2008 should largely prevent a return to the loose-lending standards that inflated the housing bubble. Against that backdrop, flat home prices between 2016 and 2022 “seems to us to be a fantastic outcome and exactly what policymakers had hoped for when establishing the new regulatory framework,” they write.

They also point to recent home-price indexes that show that the pace of increases has already slowed, suggesting that the post-crisis boom in home prices witnessed over the last two years “is most likely over.” A new period of “exceptionally low home-price growth” in which prices will rise by just 1% a year, on average, over the next eight years “most likely has started,” they write.


Phoenix Business Journal
Francine Hardaway Guest blogger
If I were the type of person who extrapolated from data to form a conclusion I wished would be true I’d say that there will be much more money for Arizona entrepreneurs in the future than there has been in the past.
The reason is that an economic forecast for 2016 I attended last month predicted real estate would be a lousy investment in the foreseeable future. And if Elliott Pollack is saying that – he of the endlessly optimistic forecasts since the '80s – it must be grim for the money in Arizona that knows no other investment.

According to Pollack, next year will be just like this year. There’s no irrational exuberance and the debt ratio is low, as low as it was in the 1980s. Inflation is low, and oil prices are low. We are now down to importing only 21 percent of our oil, compared to 65 percent in 2005, which means as a nation we’re saving about $420 million a day on oil.

The dollar is stronger, mostly because the U.S. is the prettiest house on an ugly block. In times of crisis, people flee to the dollar, and that means foreign goods are cheap here, but our goods are expensive overseas. It’s a good time to go on an international vacation.

So there’s no recession coming.

However, the remaining debts are auto debt and student loans. In manufacturing, which largely means automobiles, inventory to sales ratios are out of line, which means cutbacks in manufacturing even though the average age of a car in the U.S. is 11.5 years.

For the first time in 40 years people have had to live within their incomes, because there are no bubbles, either in the stock market or housing, which would allow them to feel wealthy.
Moreover, the number of people in their peak earning years (45-54) is decreasing and won’t increase again until 2023. Only 26 percent of people 18 to 34 are married, so millennials won’t get to the suburbs with their kids until the mid 2020s.

Predictions for the 2016 Housing Market

The Fed has raised interest rates, millennials are getting older...so what does next year's housing market look like?

No housing expert has a crystal ball, but Svenja Gudell, recently appointed chief economist for the housing site Zillow.com, has looked at enough data to make a pretty good guess.

She examines vast amounts of housing market statistics—everything from about where people are going to want to live to what areas will be hot to what the future could hold for renters—on a daily basis.

Reuters asked Gudell to share her insights on what she thinks the 2016 housing market will be like.

Reuters: What markets do you think will be places to watch in 2016?
Gudell: Next year, the combination of unemployment, population growth and the home value growth will make markets like Boise, Idaho, Salt Lake City, Utah, and Omaha, Nebraska, stand out.
Denver, Seattle, Dallas/Fort Worth and Portland, where inventory has been declining in the last year and demand continues to rise, will also be hot locations in 2016.

Are there some areas we should just give up on, instead of waiting for them to recover from the recession?
No. Cities are pretty good at reinventing themselves. There’s a city out there for everyone.
Location always matters in real estate, but are there any adjustments to that rule in 2016?
We have fairly low inventory in the cities. So next year, we’ll see first-time home buyers looking at suburbs—not just any suburbs, but those that are more dense, more walkable.
We’re also going to see an uptick in the number of condos being sold – especially for first-time home buyers. For a lot of folks, life happens not just inside their four walls but outside of them. Location, cost itself and nearby amenities will be most important.

Now that the Federal reserve has officially started to raise interest rates, what will the ripple effect be to the mortgage market in 2016?
Markets really haven’t reacted much. A lot of the expectations of the rate increase have already been built in.
As rates continue to rise—there will probably be four increases of 25 basis points each – we will start to see more of an impact at the coasts, in areas like Seattle, San Francisco, New York, and Miami.
These are already markets where people are already stretching. But, overall the effects will be relatively muted.

Is 2016 going to be the year millennials begin buying houses, now that they are older and the market is more recovered?
I feel like that was our prediction this year and it turns out we weren’t right.
Millennials are going to be bigger and bigger buyers in the market going forward. I don’t think next year we’re going to see a flood of millennials in one month or another. They’ll just trickle in.
They’re taking their time getting to the market and buying a home. They’re getting married later on in life. They’re having children later on in life. So they’re making home buying decisions later on in life.
One issue is that inventory is very low, especially on the bottom end of the price distribution. There are very few of those available, especially in these markets that have the most jobs. That’s particularly the case on the coasts. It’s a challenge for them. It’s a tough market. There is a lot competition.

What kind of new house trends are on the horizon for 2016? Are there any upgrades that are must-haves?
It’s tough with how few new homes are available, but there is a trend among builders to build larger homes on smaller lots. Land is fairly expensive so they are trying to maximize their profits given the high land costs.

Should we be optimistic or pessimistic or patient about housing in 2016?
I’m an optimist. I like to see the silver lining, but there’s going to be a lot of hurdles.